Hit Skip October 26, 2021
victim: Patrick Donegan, 38 year old White Male
St. Clair Ave at East 78th Street
Patrick Donegan was hit and killed around 2:00 a.m. on October 26th, 2021. The driver of the car failed to stop.  The victim was struck by a light colored Jeep, possibly an SUV style. Damage should be on right front of vehicle.

Crime Stoppers is offering a cash reward up to $5000 for information leading to the identity and prosecution of the hit-skip driver.
TIPSTER REMAIN ANONYMOUS.

SNIPER
WEST 58th and DENISON
CLEVELAND POLICE RANGE
On Thursday September 30, 2021, unknown person(s) fired multiple rounds into the Cleveland Police Training Gun Range. The sniper(s)
fired semi-automatic rounds at training recruits and Range Officers. The shooting occurred at 9:30 p.m. It is believed the suspect(s) fired from above the Range down into the training area. No one was injured.

CRIME STOPPERS WILL PAY UP TO $5000 FOR INFORMATION THAT LEADS TO THE IDENTITY OF ANYONE INVOLVED IN THIS CRIME.

TIPSTERS DO NOT HAVE TO GIVE THEIR NAME. TIPSTERS REMAIN ANONYMOUS.

Shooting
28th and Cedar Avenue
on Tuesday September 14, 2021 6 people were shot around 8:00 PM at 28th and Cedar Avenue, near Downtown Cleveland. It appears that 2 Black Males, one in white and one in black clothing -wearing mask-
opened fire on a crowd of people. The initial volley may have been at least 20 rounds.  Subsequent to the first shots, males most likely in a black SUV fired an additional volley of about 20 rounds.  Crime Stoppers is offering a cash reward of up to $5000 for information leading to the identity and prosecution of anyone involved in this shooting. Tipsters remain anonymous.

DAMASCUS ROAD MINISTRIES CHURCH
9915 HARVARD AVENUE
CLEVELAND, OHIO
On Friday August 20, 2021 Cleveland Police and the Church Pastor found the Church had been broken into.  Damage was found to be extensive.  Valuable Church property was stolen. Suspects ripped out copper plumbing causing significant flooding. Television monitors and sound system equipment were stolen. Restrooms were destroyed. Air conditioning equipment was damaged or stolen.
The Church has always helped the community through outreach and now is stalled in that effort.

Crimes Stoppers is offering up to a $2500 cash reward for any information leading to the identity and prosecution of anyone involved in this crime.
TIPSTERS REMAIN ANONYMOUS.

55th and Blanche Avenue
Cleveland Ohio
On July 19,2021 two armed and dangerous males attempted to ambush a Cleveland Police Officer in the area of 55 and Blanche Avenue.  Prior to the ambush attack, the two suspect shot up a house on Dunlop Avenue in Cleveland, striking and injuring a male.  The Officer spotted and began following the suspects in the vehicle.  As the officer rounded a blind curve, he spotted the two suspects standing in the street.  The suspects opened fire, shooting at least 19 rounds. The officer was not struck but the police vehicle was shot up.
Crime Stoppers is offering up to a $5000 cash reward for information leading to the identity, location, and prosecution of anyone involved in this violent crime.  Tipsters remain anonymous.

CALVIN C.Moore
Suspicious Death
Cleveland, Ohio
Calvin C. Moore, a 61 year old former sociology professor at Cleveland State University, was last seen alive around 7:30 p.m.
on December 23rd, 2020.  He walked from his apartment building, in the 3200 block of Prospect Avenue, to a nearby gas station at 30th and Carnegie Avenue. Moore did not return home. His body was found at 7:00 a.m., December 24th along North Marginal Road between East 55th Street and Interstate 90. Investigators suspect foul play.
Due to injuries suffered by Moore, police believe he may have been murdered, but a Medical Examiner ruling is yet undetermined as to cause of death.
Crime Stoppers is offering a cash reward up to $5000 for information leading to the identity and prosecution of anyone involved in this matter. Tipsters remain anonymous. 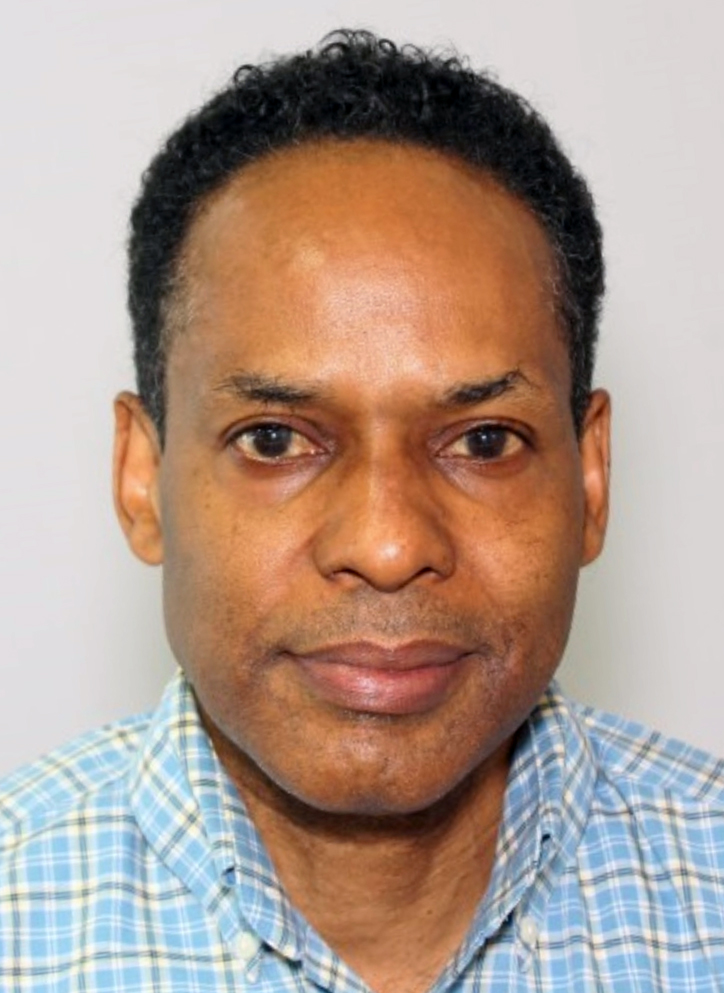 8 victims shot
Woodbridge Avenue
Cleveland, Ohio
On Sunday June 6, 2021, 8 people were shot in the 3700 block of Woodbridge Avenue.  The victims were outside, attending a graduation party when they were shot.  The drive-by shooting by multiple suspects took place around 9:30 pm. Up to $5000 cash reward for information leading to identity and prosecution of those involved in this crime. REMAIN ANONYMOUS.

The Wadsworth, Ohio Police Department and the Medina County Prosecutors Office are asking the public for assistance regarding the disappearance/Alleged Homicide of the victim Iron Cannon. Mr. Cannon is a B/M, 27 years old, approximately 6' feet tall and 218 pounds. Mr. Cannon was last seen in Wadsworth, Ohio on October 18th, 2020. Evidence gathered during the course of the Alleged Homicide/Disappearance investigation suggests that foul-play was involved. A cash-reward up-to $2500 is being offered for any information leading to the location and recovery of Mr. Cannon's remains, and the identity, location, and prosecution of the person(s) responsible for the Alleged Homicide. Any information provided to Crime Stoppers is anonymous. 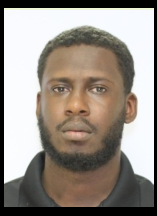 Theft of Dining Igloo Tent
February 3, 2021
CARSO ROSSO WINERY
19583 Hunt Road, Strongsville, OHIO
On February 3rd, a Dining Igloo was stolen from the Winery around 2:30 AM.  Suspect(s) entered onto the back patio and forcibly removed the Igloo Tent from the property. Police were able to track the tent through the rear of the plaza to West 130th Street.
Crime Stoppers will pay a cash reward for information that leads,to,the identity and arrest of those responsible.
REMAIN ANONYMOUS

On Friday, January 15th, 2021 at approximately 9pm. Three male subjects Car Jacked a female Uber Driver on oak View Blvd.in Garfield Heights. The subject(s) violently assaulted the victim and stole her car, cell phone, and wallet. The Uber driver picked-up the subjects at Cumberland Drive and Darlington Avenue. The victims vehicle was eventually located, and sustained heavy damage. Crime Stoppers is offering a reward up-to $2500 for any information leading to the identity, location, and prosecution of the 3 subjects involved in the Car jacking. Any information provided to Crime Stoppers will be anonymous.

FATAL HIT-SKIP ACCIDENT
NOVEMBER 29, 2020
East 156 St and Lakeshore Blvd.
On Sunday 11/29/2020 around 8:15 p.m. CRAIG RICCO was operating his motorcycle Eastbound on Lakeshore Blvd., approaching East 156 Street.  A 2006 Ford Fusion turned South on 156 into the path of the motorcycle. The driver of the Ford Fusion failed to stop, driving to a nearby gas station where she fled on foot.  CRAIG RICCO died shortly after the accident at a local hospital. The suspect hit-skip driver is possibly a Black female with short hair.
Crime Stoppers will pay a cash reward up to $2500 for information leading to the identification and prosecution of the driver of the Ford Fusion.   REMAIN ANONYMOUS.

11/16/2020
Lansing Avenue Jewish Cemetery
3953 East 57th street, Cleveland
Cleveland Police report damage to the Cemetery was discovered by an employee on 11/16/2020. The desecration included spray painted
forms of swastikas as well as other hate crime symbols. Crime Stoppers will pay a cash reward up to $2500 for information that leads to the identification and prosecution of those responsible for this crime.  Tipster remain ANONYMOUS.

Attempted Aggravated Murder/Police Officer
11\15\2020
2361 East 61st  Street, Cleveland
on Sunday morning 11\15\2020, around 3:00 AM, Cleveland Police where dispatched to an alarm at 2361 East 61st In Cleveland. As an Officer approached the front door of the house he was shot in the arm. The officer is being treated at an area hospital.

Crime Stoppers will pay a reward of up to $5000 for information that leads to the identification, location, and prosecution of anyone involved in this crime. Remain anonymous.

Hit Skip Fatal Crash
East 120th and Corlett  Avenue
DEVIN J. ISOM
On Wednesday July 1, 2020 DEVIN J. ISOM was killed in a hit skip crash. The accident t happened around 2:30 A.M. at E. 120th Street and Corlett  Avenue in Cleveland. KEVIN J. ISOM was struck while driving a Suzuki motor cycle. ISOM had the right of way at a two way stop intersection when he was struck by a vehicle that did not stop after the crash. The suspect vehicle may be a light colored SUV and should have mostly  passenger  side damage.  Any information that leads to the identity and prosecution of the hit skip driver may be eligible for a reward of up to $2500.

CRIMINAL DAMAGING PUBLIC PROPERTY
CRIMINAL DAMAGING OF PRIVATE PROPERTY
RIOTS
On may 30th and 31st, rioters caused considerable damage to both public and private property, mainly in the downtown business district in Cleveland, Ohio. Damage was done to the Cuyahoga County Justice Center building as well as other county and city facilities. Rioters smashed doors and windows, and sprayed painted the exterior of buildings. Rioters also set-fire to government property and vehicles.
Rioters also damaged and looted privately owned business. This rioting has caused a significant financial loss to the private and public entities.
Crime Stoppers is offering up to a $2500 cash-reward for any tips that lead to the identity and prosecution of person(s) committing crimes during this riot. 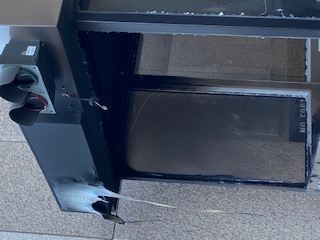 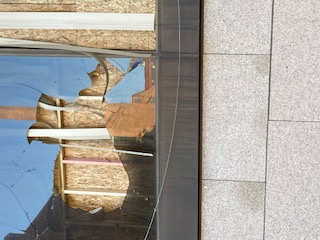 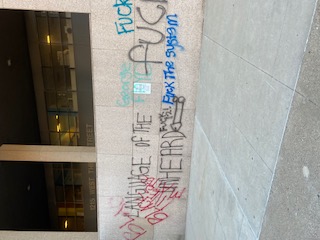 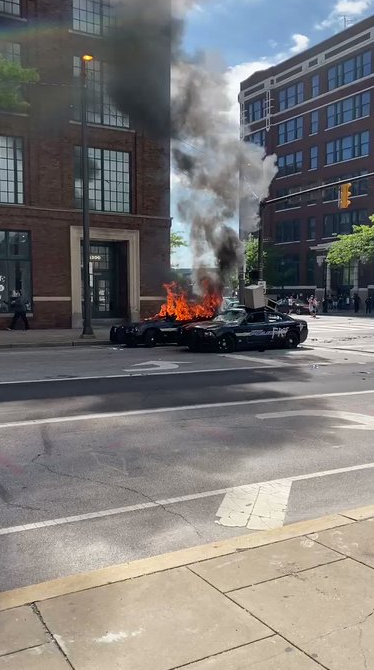 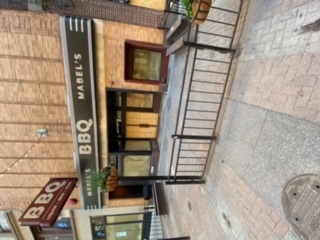 On Wednesday May 27, 2020 JAMIL LOGAN was shot and killed at 2:30 in the morning at 12800 Euclid Avenue, East Cleveland, Ohio.
JAMIL LOGAN was found shot multiple times in the parking lot of
Hanini Express. East Cleveland Police are seeking information on any person or persons involved in this murder.
Crime Stoppers is offering up to a $2500 cash reward for information leading to the identity and prosecution of anyone involved in this killing. All tipster may remain anonymous.

500 Block of Prospect Avenue
Downtown Cleveland, Ohio
An 18 year old man was shot and killed around 1:30 a.m. Saturday morning.  He was apparently shot while attending a party at the Residence Inn Hotel. He ended up in a crashed Jeep across from the hotel. Anyone with information on this murder is asked to contact Crime Stoppers. REWARD UP TO $2500 for information leading to the identity and prosecution of those involved.
REMAIN ANONYMOUS

Glenville Neighborhood
Cleveland, Ohio
Early Saturday afternoon multiple people were shot in the Superior Avenue area.  An 18 year old male was shot in the area of  E.109th and Superior, near a funeral home.  Another 18 year old man was found shot on E.99th, near Superior and a third male was found shot in the 1100 block of E.85th.  Any tip that leads to the identity and prosecution of those involved in these shootings may be eligible for a cash reward.

Shooting
Libby Rd. maple Hts., Ohio
on Thursday April 2, 2020 a ten year old Maple Hts, Ohio boy was shot on Libby RD.  The shooting took place in the late afternoon. The young man was shot while playing in his front yard. At this time there is no suspect description.
Remain Anonymous.            Up to $2500 in reward money.

Hit skip
Bay Village, Ohio
On Tuesday March 31, 2020 at Aberdeen Avenue and Cahoon Road a 52 year old man was struck by a vehicle; the driver did not stop. The victim was walking his dog on the sidewalk shortly after 9:00 p.m.
when he was hit and seriously injured. Anyone with information on this hit-skip is asked to contact police or Crime Stoppers.